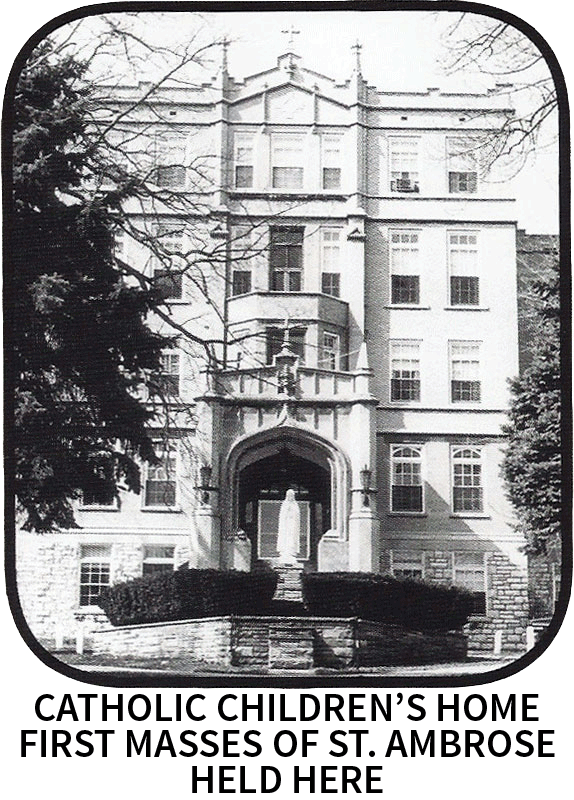 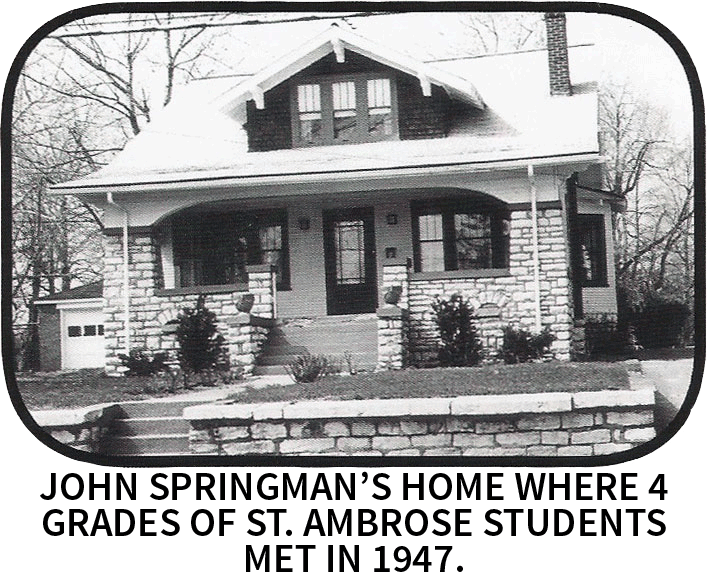 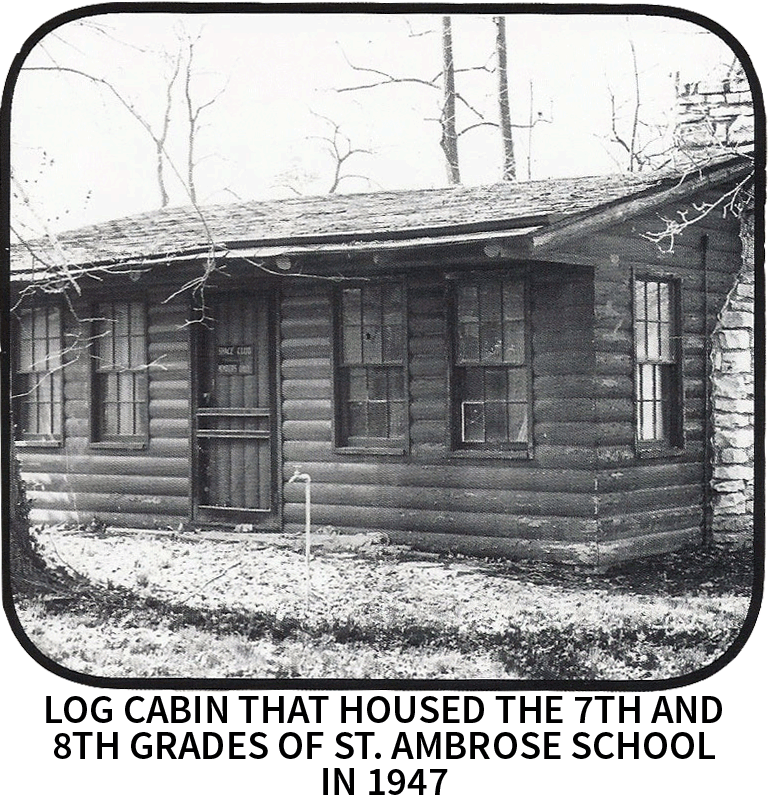 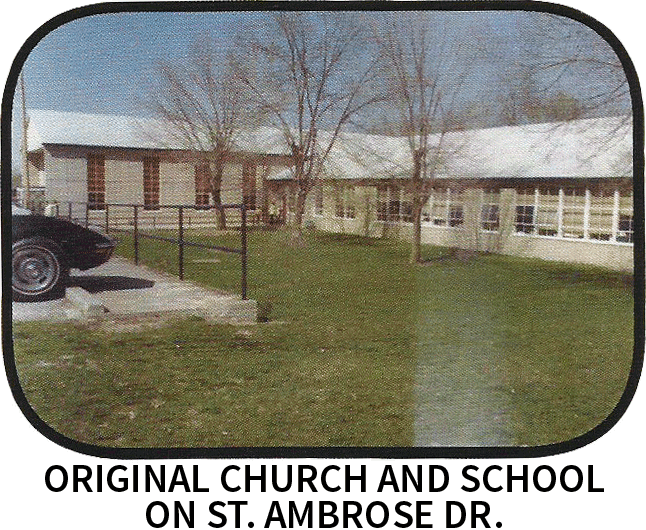 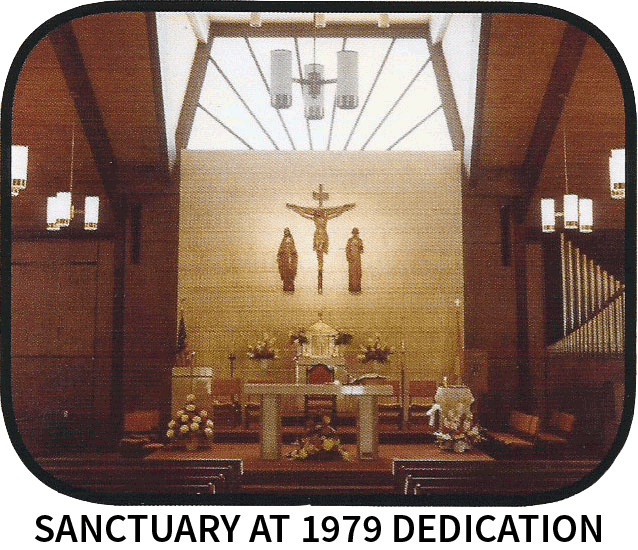 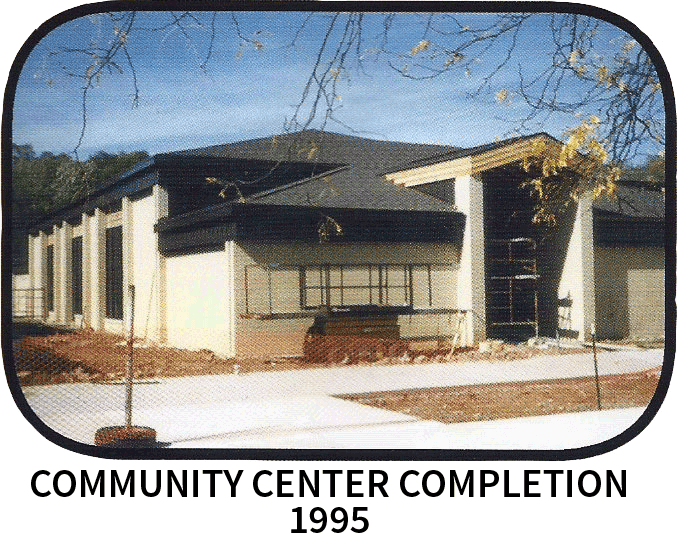 On August 1, 1947, two years after World War II ended, the pastors of St. Mary’s and SS. Peter and Paul announced the beginning of the St. Ambrose pilgrimage as a new parish family.  It began at the Catholic Children’s Home where Mass was celebrated for the parishioners until a new church could be constructed.

Father Andrew Robinson was chosen by Bishop James Griffith to shepherd this new parish family.  At Mass that first Sunday, a meeting was announced.  Planning for a new parish facility was the first order of business for the new parish leaders. Fourteen acres were purchased from the Maher family at a cost of $10,500.  It was to house a simple church, a parish rectory and the beginnings of an elementary school.  In the meantime, parishioners continued to worship at the Children’s Home.  School was in session in the Ursuline Convent and at the home of the John Springman family.

With much hard work and determination by Father Robinson and the parishioners, the new church was completed on February 8, 1948.  Two hundred fifty families worshiped together in their new church home and one hundred thirty-five students, along with their four Ursuline teachers, welcomed their new school building.  The first part of the journey was complete but continued, as the surrounding area developed and the spiritual needs of the people continued to grow.

By 1959, the parish plant grew to include four classrooms on the north side of Homer Adams Parkway.  In 1964, six additional classrooms were added.  Catholic education was a priority to the people then as it continues to be today.

Father Robinson shepherded the people until his death on June 11, 1967.  Monsignor Henry Knoedler was named the new pastor and led the people of St. Ambrose on their continued pilgrimage until 1977 when Father Terry Shea became pastor.

Although Father Shea’s stay at St. Ambrose was brief, it was a time of significant growth and change.  During his time at St. Ambrose, Father Shea and the parishioners worked together to build a larger and more fitting house of worship for the parish.  Included in the project were a new living area for the priests, offices, and two additional classrooms.  On February 8, 1978, the thirtieth anniversary of the first Mass in the original church, Father Shea celebrated the first Mass in our present church.  In spite of a vigorous February blizzard, two hundred faithful parishioners worshiped the Lord without pews and without an altar.  A pilgrim spirit continued to be a mark of St. Ambrose people.

On April 29, 1979, Bishop McNicholas processed with the people on the pilgrimage from their simple church to the new St. Ambrose for its dedication.  Less than three years after Father Shea arrived, he celebrated with the people of St. Ambrose the realization of their dream of having a new and more fitting place to worship with the Lord.

On July 2, 1979, Father James Hill followed Father Shea as pastor.  During Father Hill’s time at St. Ambrose, fire destroyed the original Church plant; including the classrooms.  Additional classrooms were constructed so all students could be served in one building.  Father Hill’s interest in the parishioners as well as his business expertise served the needs of the parish very well.

Father Hill’s replacement, Father Don Blickhan, arrive in March 1986.  His stay at St. Ambrose was very brief.  During his pastorate, the original parish plant was sold to another Christian denomination.

The parish continued to grow and needs continued to change.  When Father Virgil Mank arrived in June 1988, his work as shepherd was waiting for him.

While the school continued to thrive, Father sensed unmet needs in other areas of parish life.  Father Mank set out to provide the space and staff to address the needs of adult members of the parish seeking renewal and information, persons wishing to become Catholic, youth who were no longer enrolled at St. Ambrose and older adult members who needed to build their own community.

While staff members were added and a place was provided in the area formerly used as a rectory, needs continued to surface.  The time case for the construction of a community center and gymnasium, both of which were lost when fire destroyed the original facility.  With the encouragement and support of the people, the new facilities were carefully designed, constructed and dedicated by Bishop Daniel L. Ryan on April 22, 1996.

Father Stephen J. Pohlman became the seventh pastor of St. Ambrose Parish in July 2004.  He has been tireless in is motivational efforts to increase participation of parish members in parish life and parish support.

Since the parish complex consists of some facilities from the late 1950s, constant attention is required.  This has been accomplished with several major upgrades:  new roofs for our church and school – 2005; sanctuary and church renovations – 2006; new stained glass windows – 2012; new digital organ – 2014; and new sound system – 2015.  Classroom upgrades and implementation of computer technologies have been made throughout the school.

While Father Steve has been the only resident priest at St. Ambrose, he has been ably assisted by Deacons William Kessler and Thomas Wilkinson, Father Jerry Wickenhauser and various priests from the nearby Oblate Novitiate, as well as a consistent group of parishioners who support the parish, school and community outreach activities.

It would seem that after 68 years, the pilgrimage is complete.  Perhaps that is true of the pilgrimage involving sacred places.  Our own person pilgrimages continue here in our parish of St. Ambrose.  Each of us is called to personal holiness.  We have every advantage of terms of space, environment, opportunity, resources, leadership and companionship.  May we continue to answer our own personal call as a thanksgiving for all that we have here at St. Ambrose.